In the picture below is Rudy her husband Benard, and his Aunt Naomi and Uncle Jeffery and. Rudy and Benard removed all of their belongings from their house and slept in a small 5×8 our building. They allowed us to stay in their house for these three weeks. Rudy and Benard were technically considered our “was mama” and “was papa” however they were the same age as Fred and I. We mostly called them by their names. Also, Benard was not around much, he worked on a truck that would carry people too and from town. However, we had a ‘was brota’ and ‘was susa’ that were around all the time to help us with anything we needed or anything we wanted to learn.

The family we are with in the picture below is Shem and Bilu. Pictured is their oldest son Gendly. They also have twins named Jovita and Radin. I was informed that this family was originally asked to be our “was femili”. They are Christians and friends with the translator that is currently working on their heart language bible translation. Bilu and Shem have been to Ukarumpa for training to be elementary school teachers. They truly stepped in and acted as our “was femili”. If I asked to go somewhere Bilu made it happen! Shem built us an awesome cook stove up off the ground so we didn’t have to bend down anymore! Ivy loves Gendly as you can see from the picture! And their son Radin was always around to play Uno with the kids!

Do you remember the ‘was brota’ and ‘was susa’ I mentioned? This is them in the picture below with us. Wakson and Janet and their little boy Shane. In this picture Shane is wearing some of Ethan’s clothes that we gifted to him. And the ‘Meri blous’ or ladies blouse I am wearing in this picture came from Janet. Wakson was one of the only men around on a regular basis for Fred to talk to and learn from. Janet was always around preparing food for us for helping me wash my clothes and dishes. Shane was always there too. Playing with the kids or watching us make fools of ourselves! 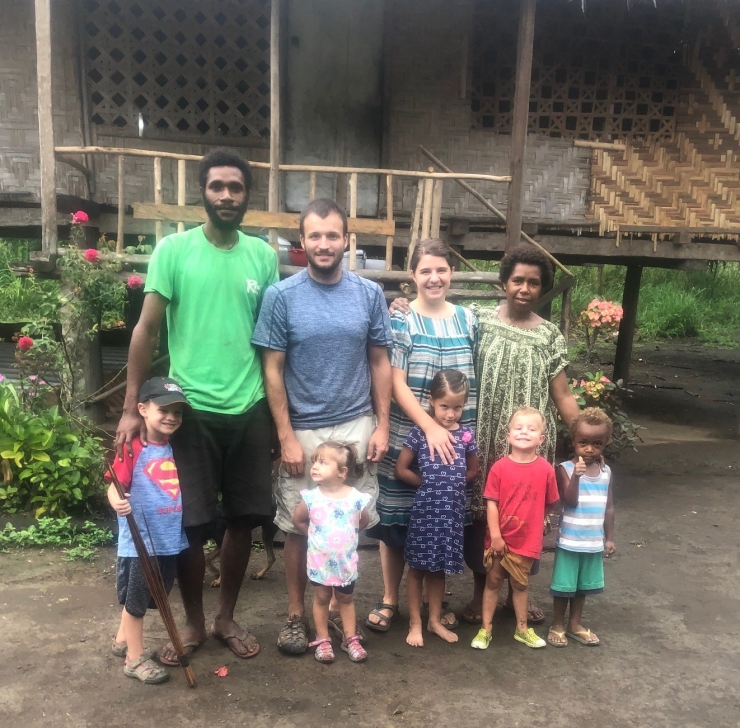 We found out pretty quickly that Bilu and Shem were originally asked to be our ‘Was famili’. Their house was not big enough to hold a family of our size and they didn’t have the time to build a new one before we got there. So Rudy and Benard were asked to open up their home. Their home is one of the biggest in the village, but they had no children of their own so they agreed to host us.

We were encouraged to give an ‘amamas’ to our ‘was famili’. In short this is translated ‘happy’. Giving gifts is a very happy thing. Gifts can mend relationships that were once broken, make new friends, or tell someone how happy you are to have them in your life. We were encouraged to give ‘amamas’ gifts to the people who hosted us in the village. Then one morning I was called over to talk with our ‘was mama’ and ‘was brother’, they shared with me that I was not to give gifts to anyone. I was to leave everything in the house that we wanted to give to the village and that Rudy and Benard would then ’tilumaut’ or distribute it. We were not real thrilled about this because it meant more that they maybe wanted to keep most of it for themselves because cargo or possessions can be very elevated in their culture.

So looking back the Spirit gave me direction on who to give a few small gifts to. Examples would be: material, empty tupperware containers, crayons, clothes, and crochet hooks. These were for women and children. For the men Fred was able to give a few shirts, a pocket knife, and a knife file. Then with the things we thought could be distributed we did leave in the hut for our ‘was mama’ and ‘was papa’. They did open their home, teach us their language, their culture, their cooking, their ‘Way”.

Through this we were reminded that our treasure truly is in heaven! That no matter how much stuff we have or we have to give away, the love we have for people and the godly example show should our focus!

“But store up for yourselves treasures in heaven, where moths and vermin do not destroy, and where thieves do not break in and steal. For where your treasure is, there your heart will also be.” — Matthew 6:20-21

1 thought on “Village Living: Was famili”